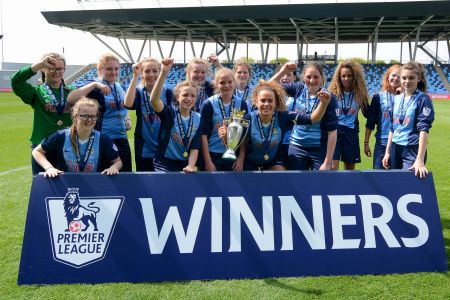 For todays’ player profile we are looking at a former ESFA Girl’s Under 15 captain. Brenna McPartlan is an example of an all-round athlete who has excelled within the game.

Brenna attended St. Bede’s High School and represented them in athletics, badminton and table tennis. She was also a football player for St. Bede’s school and for Lancashire CFA.

Playing for her school McPartlan helped the team to great success in ESFA competitions. McPartlan was part of the St. Bede’s team which won the ESFA Under 13 Schools Cup, ESFA Under 15 PlayStation Schools Cup and the ESFA U16 Premier League Schools’ Cup. McPartlan scored a hat trick on the way to the final victory, which saw the side nominated for a Lancashire Telegraph Grassroots Hero award.

McPartlan was also an influential figure during her time at Lancashire County Schools’ FA. She was a key player in their victories in the ESFA PlayStation Under 14 Inter-County Trophy and the ESFA Under 16 Inter-County Trophy. Her performances at school and county level lead to her receiving an ESFA Under 15 Girls call up and she would go on to captain the side.

Everyone at ESFA would like to congratulate Brenna on her success in her football career and with her continuous progress.