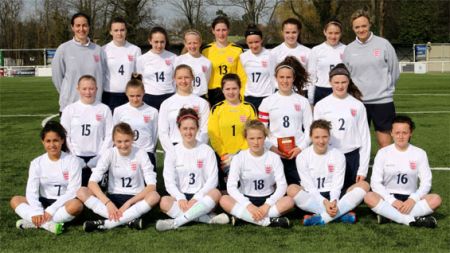 From the 6th of November is Girl’s Football Week, which is a big deal here at the English Schools’ FA. To celebrate we’re going to have a look at some of the notable girls’ footballers that have been involved in English Schools in recent years.

The first player that we are going to focus on will be Alessia Russo, who played for the ESFA Girls’ Under 15 team in 2013/14. Russo played multiple times for the side, most notably coming on in a match against the Republic of Ireland that would see her score and play an influential role in an 8 – 0 victories. Russo also represented Kent CSFA at the ESFA PlayStations Under 14 Girls Inter-County Trophy. The game finished with a 1-0 defeat for Kent CSFA with Russo being one on the stand out performers on the day.

Following this experience, Russo would go on the represent the England Under 15 team on two occasions before progressing to the Under 17’s Girls. In her 27 appearances at this level including five goals in a 13-0 victory over Croatia. Russo scored 17 goals and was influential in recovering a 3-3 draw against North Korea in the FIFA Women’s U17 World Cup in Jordan. Russo has since moved into the Under 19 Women’s’ squad where she has made eleven appearances.

Russo was also part of the Chelsea LFC academy squad, which she would captain, before making her debut ad only performance for Chelsea Ladies in the FA WSL Cup. Russo then joined Brighton & Hove Albion and would make 7 appearances for the side, scoring three times. One of those goals won goal of the month in May 2017, showcasing the skill that Russo possesses.

Alessia Russo is now playing for the North Carolina Tar Heels, joining the University in 2017. The Tar Heels won the 2017 Atlantic Coast Conference Women’s Soccer Championship, with Russo being named the MVP in the final.

Everyone at ESFA would like to congratulate Alessia on her success in her football career and with her continuous progress.