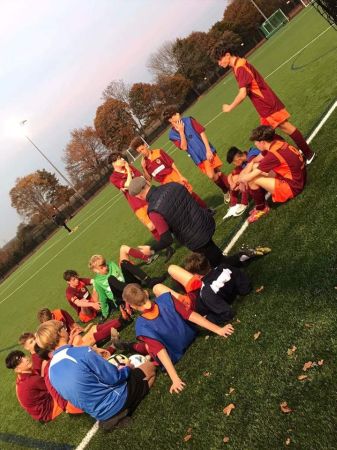 The first ten minutes were a little scratchy which comes from a lay off, but a few ranging strikes went narrowly wide and North Somerset’s goal keeper was in good form.

Then with each team-mate dovetailing into balance and understanding the fluency started to come and it looked ominous.

The first goal came from pressurising our opponents higher and the impressive Jamie Nicholson being rewarded for his positional awareness. After a Schock strike wasn’t dealt with Jamie pounced to finish with composure.

The second goal came from Danny Chapman and Olly Chubb winning the midfield battle to release Sully to scamper clear and calmly slide the ball past the keeper - who was having a fantastic game.

With the back five of Pike, Murphy, Hendy, Dimond and Webber marshalling the defensive third it allowed attacks to come from solid foundations and the third goal came. Moving the ball with more pace and purpose Jacob Schock was this time on the end of a good attack.

The forth before half time was skipper Taylor Powell who followed in another slick approach to guide the ball into the net.

In the second period numerous changes to provide opportunity but to maintain a firm grip of the game. For our visitors they looked to resist and pick up momentum.

Louie Adams, Joe Ponter and Kane Savery set about maintaining the balance of the side plus an attacking threat, and this occurred even with our opponents investing good energy.

With a good crowd watching the team really turned the screw, recognising when to exploit areas with purpose. Savery popped up to start the second half goals.

Having the ability to play through the thirds plus know when to recognise spaces created, is a trait the players are maturing to. Chubb, Nicholson, Chapman and Powell are gaining good awareness all the time infront of a defence who moved the ball with increasing vigour.

Nightingill and Campbell had Inter-District County Cup debuts - again with the task of influencing the sides grip on the game. This was cemented by a clever Louie Adams finish, having positioned himself well between the two Centre half’s. Then a superb finish by Adam Willis, who again made his U14 debut. Willis read the build up well to latch onto a pass which from 20 yards he struck like an arrow into the top corner to polish off a resounding win.

The visitors showed good levels of commitment to their association, sticking to the task throughout. It’s always difficult when another team scores a number of goals, but great respect was shown by both sides.