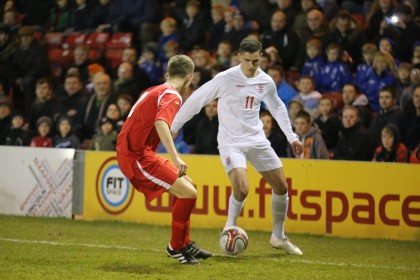 Hardly had the respective chairmen and dignitaries settled into their seats post national anthems, and yours truly had sharpened his pencil, did England find themselves a goal behind in the match. Direct from the off Wales attacked on the right and won a throw in near the corner post. Right Back Liam James strode up and began his torment of the English defence by launching a Stoke City style long throw into the box. Cold and flat footed the English back four failed to deal with the ball and it squirted through to Josh Jones on the top of the box, left hand side, and he duly rifled it first time into the bottom corner of the net. 0 – 1 down in 1 minute 34 seconds was not the start new England manager Andy Buckingham was looking for.

A rattled England side finally constructed an attack after 7 minutes with Ryan Fergany breaking down the right and hitting a superb cross, but the Welsh managed to scramble it clear. A few passes later had the Welsh deep into English territory on the right. The English back four all wandered thoughtlessly ball-wards and when it was played across the top of the box there again was Wales’ number 11, Josh Jones, and he duly repeated his first effort by placing the ball into the same corner of the net. 0 – 2 down in less than 8 minutes. Shocked and shapeless, England returned to kick off.

It took 17 minutes before England showed any real skill and adventure when Luke Donaldson used all his pace and guile to attack on the left and cross into the box. For the first time in the game the very solid Welsh centre backs looked troubled but goalkeeper Matthew Swan came to their aid blocking Fergany’s short range shot.

Then back to the England half of the field and another searing long throw in from the right, a few bounces in the box as the English wandered around confused, and up pops Jones for another dig at goal. For once his shot rebounds off a defender but it bounced up near to Wales’ number 10, Ryan Hedges, who in spectacular overhead fashion duly dispatches the ball into the top corner of the net. 0 – 3 after only 18 minutes.

The Welsh, now feeling quietly confident, relaxed a little and on 20 minutes allowed Fergany a run down the right, past a couple of defenders to the by line, but Shaquille Hippolyte-Patrick’s attempt from the pull-back smashed against the near post and rebounded clear, when it should have been scored. “It must be St David’s Day” cried the Welsh chairman from the stands.

Whilst England did their best to create something with occasional runs from Rhys Turner it was the Welsh who looked more likely to increase their lead, and right back James headed just wide from a corner, before teasing England with more long throws. At last England got some reward for their efforts as Turner battled his way down the left hand side and was able to pull the ball back to Robert Gilroy who slotted it into the corner of the Welsh net. 1 – 3 and England were back with some slim hope of recovery.

While England chased and harried there was little really constructive play and the very solid and secure Welsh back four, particularly centre backs Thomas and Evans, were infrequently troubled. England hoped for another goal and would have loved to go in at half time at 2 – 3, but it was the Welsh who were most likely to amend the score-sheet. It was left to goalkeeper Michael Pearce to keep England in the game, when a left side corner was met full on by unmarked Welsh number 5 Iestyn Evans it looked every inch a fourth goal. Diving to his left Pearce pulled out a fabulous one handed reaction save, much to the relief of his defence.

Several substitutions and an adjustment to the shape of the team at half time failed to make much of an impression on the Welsh; they were just far too strong down the spine of their team and continued to win most challenges and headers. While England fiddled around failing to worry the opposition, the much more positive and forward looking Welsh were always a danger. The inclusion of Nicholas Haughton to the game nine minutes into the second half looked like things at last might change – he added pace and craft to the team down the left side and at last gave the Welsh something to think about. A ball from him set Michael Smith away 15 minutes into the half and his speculative 40 yard effort had the goalkeeper scrambling back, only for the ball to land on the roof of the net.

Four minutes later a weak header out of the England defence arrived at Ryan Hedges feet in centre field – one touch and a smash volley from 35 yards showed Smith just how it should be done, the unstoppable ball flying under the bar for an unassailable 4-1 lead to Wales. It was beginning to feel like every shot by Wales would break the English net – it was one of those evenings.

England continued their ineffective efforts right to the end, although Jack Odam, Nick Haughton and Ross Bailey did give the goalkeeper some exercise, and he was called upon to make one spectacular one handed save from Haughton near the final whistle – but it was not to be England’s day. Man of the match was quite rightly awarded to Wales number 11 Josh Jones.

On the positive side it was an excellent evening of schools football, the Lincoln City Stadium was first class, and the near 2900 crowd were royally entertained. Many thanks are extended to Lincolnshire Schools' FA for all their hard work in staging this very successful event.