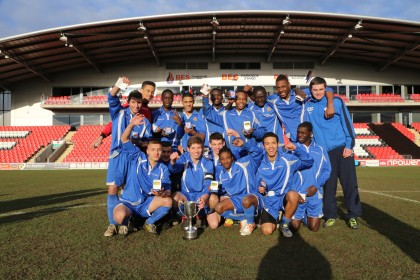 Stanmore College from Harrow with the ESFA U18 Colleges' Trophy

Stanmore College from Harrow and Hopwood Hall College from Manchester stepped out onto the pitch at Highbury Stadium, home of Fleetwood Town FC, to contest for the ESFA Under 18 Colleges’ Trophy for Boys.

Stanmore kicked off the game and we only had to wait 4 minutes for the first goal. The ball was taken down the right wing and played into the box, Koran Goldson hit the ball first time into the roof of the net to put Stanmore College in front.

Stanmore then added to their lead 3 minutes later as the ball was played down the right wing by Aron Ruszel and he then crossed in so that Koran Goldson could score his second by heading it past the keeper. Stanmore were now 2-0 inside the first 10 minutes.

Hopwood Hall then put on the pressure with a free kick taken just outside the box but was slightly over-hit as Sam Rathbone only needed a touch to put it into the net but it went out for a goal kick. Hopwood Hall’s best chance so far.

The game then turned into end-to-end football with chances at both ends. Hopwood Hall were pressing Stanmore towards the end of the half but Stanmore took the ball down the left wing and the ball was struck by Ashley Nathaniel-George but was deflected into the net to make the score 3-0 going into half time.

6 minutes later Hopwood hit again from another set piece. The free kick was taken by Kane Hughes but straight into the wall, the ball bounced out and Luke Heron capitalised and put the ball into the back of Stanmore’s net. This put Hopwood Hall within 1 goal of drawing level.

The game then levelled out with more end-to-end football.

Hopwood Hall then got their equaliser in the 71st minute with Kane Hughes bringing the ball forward, turning through the defence and scoring to put the game level at 3-3.

Stanmore were back in front within 1 minute as Ashley Nathaniel-George got his second after running onto a pass from Reece Grant out on the left and then scoring to put Stanmore 4-3 ahead.

Stanmore then put the game to bed by scoring only 2 minutes later. Ashley Nathaniel-George got his hat-trick by taking the ball down the left and cutting inside to score. Stanmore had some breathing space for the last 15 minutes of the game.

Hopwood Hall were pressing forward again but could not break through the Stanmore defence and the game ended Stanmore 5, Hopwood Hall 3.

Both teams were then presented with their medals and Stanmore shortly lifted the ESFA Under 18 Colleges’ Trophy in front of the crowd and named National Champions for 2012/13.

Photos and a match DVD can be purchased via RWT Photography.