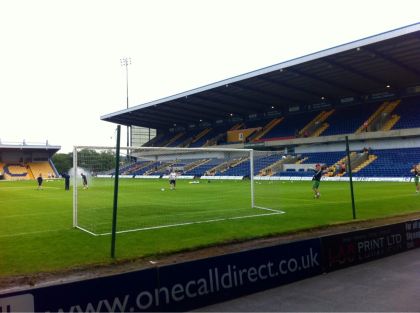 On a cold wet day at the One Call Stadium, home of Mansfield Football Club, South Gloucestershire and Stroud College took on Gateshead College for the chance to be crowned National Champions.

There was some good football on display from both sides, with South Gloucestershire and Stroud College controlling the ball well and creating two early chances ending in shots off target.

The early exchanges were favouring South Gloucestershire and Stroud College, with Captain Rhian Cleverly forcing the Gateshead keeper, Megan Borthwick to make her first save of the day.

Gateshead College began to assert themselves as the half went on and winger Ellie Hall broke free of the defence and fired a low shot millimetre’s wide of the far post.

Only a minute later Gateshead had the ball in the back of the net after Rebecca Olley smacked a freekick against the bar from the edge of the box and Lauren Briggs reacted quickest in the box to score the rebound, only to be disallowed for offside.

This signalled the start of a long period of pressure from Gateshead who created some excellent opportunities over the next fifteen minutes after the attacking combination play of Rebecca Olley, Ellie Hall, Jasmine Petre and Abbey Joice.

Hall couldn’t take advantage of the two opportunities she was given, shooting wide on one occasion and being thwarted by the South Gloucestershire and Stroud goalkeeper Sally Gill on the other.

0-0 at Half Time, Gateshead perhaps had the better chances, but couldn’t make the most of them.

Gateshead continued to apply pressure as soon as the second half began and after only three minutes found themselves ahead through Number 9, Jasmine Petre as she capitalised on a deflected shot from Abbey Joice clinically curling the ball into the top corner.

South Gloucestershire and Stroud college pushed on and attempted to gain a goal back, with defender Charlotte Bassett firing a long shot at the Gateshead goalkeeper after a solid period of pressure and possession of the ball.

Both teams had chances as the game opened up and became an end-to-end affair, but it was Gateshead who delivered a telling blow. After forcing a corner that was eventually scrambled clear, Charlotte Potts looped the ball back into the box from over thirty yards away and the trajectory was just right to carry the ball over the stranded keeper and over the goalline.

Gateshead almost found a third moments later after they broke through the Gloucestershire back line, only for Gill to again make a fantastic reflex save and keep the score at 2-0.

South Gloucestershire and Stroud College tried desperately to pull a goal back and came close through Ellie Leek who could only manage to find the side netting with her finish from a tight angle.

As legs grew tired on a heavy pitch substitute Hannah Smith was rewarded for her determination as she grabbed the chance late on to surge past her marker and fire a shot into the bottom corner from close range to wrap up the National Championship at 3-0 for the Girls from Gateshead. 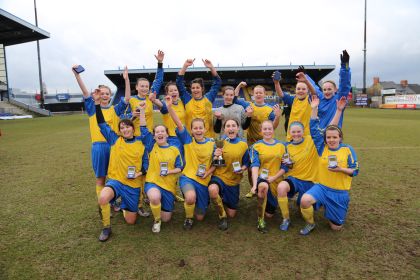 We would like to congratulate both teams for an excellent game of football played in the right spirit and also extend our thanks to Mansfield Town FC for the use of their excellent facilities.