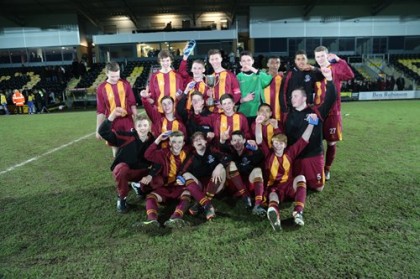 The sun came out for the second of our National Finals at Burton Albion’s Pirelli Stadium this afternoon. It began with a great tempo in the opening minutes of the game with the ball being moved quickly from end to end creating a few early chances on goal.

The first clear chance fell to Zach Williams of Thomas Telford who chested down a corner after finding himself in plenty of space at the back post, only to fire the shot up into the stands.

The fierce tempo couldn’t keep on as both times slowed a little and the ball changed hands frequently. Thomas Telford perhaps looked the better side asking questions of the Chelmer Valley defenders, the long throws of full back Zach Williams caused confusion at set pieces, but Chelmer Valley held firm.

On the half hour mark Thomas Telford captain David Arrowsmith had a great chance to put his side ahead, heading just over the bar from a corner.

Josh Lawerence and Tyler Brampton, Chelmer Valley centre forwards, worked hard to latch onto any through ball they were given, their speed causing trouble throughout the first half. Brampton had a good chance to go ahead in the tie, shooting across the keeper but lacking the pace to beat Matt Turner in goal.

Just before the half time whistle Arrowsmith had another glorious chance, this time heading against the woodwork from six yards out

0-0 at half time, plenty of half chances and plenty of excitement but still no goals.

Both teams came out after half time looking to push on and take control of the game, the first big chance came ten minutes into the second half with Chelmer Valley forward Brampton again using his pace to burst through on goal, only to shoot high and wide.

Thomas Telford hit back immediately, moving the ball quickly up the pitch ending with Cameron Bridgen crossed from wide right for Thomas Fallon to place into the back of the net at the near post.

Thomas Telford pressed on and had two chances in quick succession neither of which they could put away to extend their lead.

Chelmer Valley’s Brampton was once again at the thick of it, having the chance to equalise from the edge of the area with a freekick which he fired over the bar.

Another scintillating break from Thomas Telford saw them go two goals ahead after substitute Liam Groome used his first few touches to gallop up the pitch and square the ball to striker Thomas Fallon to bag his second of the game.

Two minutes later Liam Groome was in the limelight again, slamming a botched clearance into the goal after a mazy run from Kaiman Anderson took four defenders out of the game and caused mayhem in the Chelmer Valley defence.

Another chance to stretch the lead for Telford with Scott McDougall curving the ball deliciously towards the goal from a freekick on the edge of the box, only to see it strike the bar. The rebound was followed up and smashed back at goal with Matt Turner, the Chelmer Valley goalkeeper keeping it out with a reflex save.

A great occasion for all involved with superb support for both Schools. Congratulations to Thomas Telford on their National Championship, this was perhaps a bridge too far for Chelmer Valley although they fought valiantly.

Photos and a match DVD can be purchased via RWT Photography