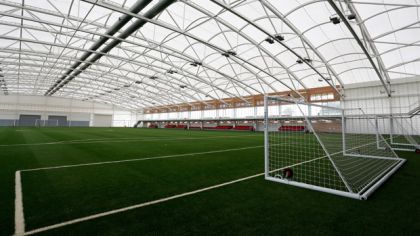 It was a real privilege for our first Girls’ game of the season to be played at the magnificent indoor arena at St George’s Park. The national anthems of both teams echoed around the vast space within the state of the art 3G.

The Scots were hugely motivated to give England the blues on their home turf and started the game with the confidence and determination of a team that had already played four games this season. Early exchanges were scrappy and Scottish attempts to progress through the middle were comfortably mopped up by centre back Charlotte Steggles, whose strapped knee was no hindrance to her, and centre forward Georgia Stanway looked quick and threatening up front for England. After 6 minutes she broke free from the Scottish back 4 but chose to shoot from too far out and straight at the keeper.

After 8 minutes, England won the first corner of the game when Lucy Shepherd dribbled a long way down the right wing. Sadly Amber Tullett’s beautifully struck corner kick flew through the England attack and Scottish defence with no-one managing a touch on the ball. From the restart Scotland’s Cailan Michie powered forward but her shot from 15 yards was confidently stopped by England custodian Chloe Beattie. Scotland were getting much more in to the game and in the 11th minute the industrious Erin Cuthbert slid through to Amy Gallagher but her first time shot went wide of the post.

Cuthbert was beginning to show her class and controlled the middle of the park. After 16 minutes she hit a raking ball in to the box and had England in all sorts of difficulty as the ball bounced off one defender then another until ‘keeper Beattie took control and hooked it to safety. England were relying on quick breaks from the back to make any impression and it was from another superb run down the right by Shepherd as she shrugged off 3 challenges, then crossed firmly into the box. Stanway met it full on but her shot hit the keeper and rebounded back into the path of newly introduced substitute Laura Hooper who prodded it home. 20 minutes gone and 1-0 to England.

Upsetting the Scots is never a good idea and they came roaring back with Courtney Whyte driving them forward, especially from free kicks which she took from all over the pitch. In the 23rd minute one went just over the bar, then 4 minutes later another was headed just wide, and that was smartly followed by her partner in crime, Cuthbert, whose shot in the 29th minute had ‘keeper Beattie scrambling to her right to keep it out.

Right on half time Cuthbert’s pressure won the ball on the right; she followed with a smart interchange of passes before smashing the ball into the opposite corner of the net to bring Scotland level.

Both sides had put on an impressive performance in the first half, particularly in the way the teams kept a good shape despite the acres of space in an arena which has been designed to the same specifications as Wembley. England applied early pressure in the second half but the Scots were resolute in defence and only once looked to cause trouble when after eight minutes Becky Flaherty in the Scots goal fluffed a clearance which went up in the air and span back towards her own goal forcing her to race back and clear at the second attempt.

Scotland’s movement and passing in midfield continued to cause problems for England and several free kicks were given away. In the 41st minute Courtney Whyte stepped up to take a kick from all of 40 yards and cracked it against the bar; the English defence froze as Cailin Michie fired the rebound goalwards, it bounced back off a defender and Katie Rice reacted first and shot home to give Scotland a 2-1 lead.

England tried hard to recover and were helped by the moving of Laura Hooper into centre midfield where her strength and passing ability made them much more imaginative, but even so she was never able to dominate Scotland’s Cuthbert and Whyte. Whyte’s free kicks were a continual threat to England; one after 54 minutes bypassed everyone in the box when just a touch was needed, then another after 57 minutes was headed wide by Chantelle Brown. Cuthbert then showed all the skills learnt at Rangers FC as she wriggled past 3 English defenders into the box before being finally blocked by Millie Elson.

After 59 minute England had their best chance of the half when Lucy Shepherd won the ball on the right and released Stanway who breezed past the Scottish centre backs and shot at goal, but it was palmed away for a corner when she really ought to have scored. Then, just two minutes later, the Scots showed just how it should be done – another long free kick from Whyte on the half way line was met by Brown racing goal-wards, she shrugged off the attentions of the English centre backs and lobbed the ball over the advancing ‘keeper Jessica Lewandowski for 3-1 to Scotland.

While England were beaten they were not at all outclassed as Scotland made full use of the experience they have had of playing together several times. The Scots through Whyte and Cuthbert had a stronger spine to their team but when England progressed down the flanks the Scots were definitely vulnerable. These teams may meet twice more this season and it is definitely not over yet.

Well done to all the Girl’s who competed in the game, and a huge thank you to all the staff at St George’s Park for helping to host the event.