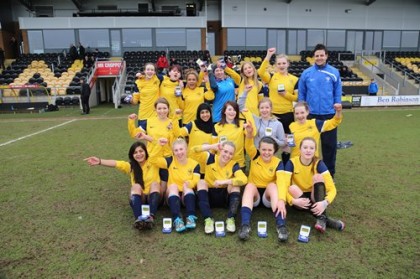 The half started fast with early pressure coming from Laurence Jackson School. After 10 minutes played the game was end to end football with both teams advancing.

Less than 2 minutes later Maiden Erlegh were back into the game. A free kick came over from the right side and put into the box, the ball was then deflected by a Laurence Jackson defender and the ball found its way into the net to make it 1-1.

After 18 minutes there was a break by Laurence Jackson School as Korede Akintoye chased the forward ball after a breakdown in communication between keeper and defender the ball finally found its way into the keepers hands.

On 29 there was a speculative effort by Laurence Jackson’s Charlotte Agar from 30 yards, but the keeper saw the ball coming and caught to keep the scores level.

3 minutes later and Maiden Erlegh get a chance with Laura Harris-Steers being in the box but the keeper makes a save.

53 minutes gone and Maiden Erlegh get a shot on target. Abigail Reed took the ball from her midfield and struck early but Erin Breckon in goal got down to save.

2 minutes later and Maiden Erlegh go in front after Laura Harris-Steers puts the ball into the net. The ball came over in a cross from the left side and she slotted the ball past the keeper. Maiden Erlegh 2, Laurence Jackson 1.

Laurence Jackson could have been back in the game on 63 minutes as the ball is put into the box from a corner but no one gets on the end of it. Still 2-1.

One minute later and Laurence Jackson School get the equaliser. The ball is looped into the air from a corner and Charlotte Law gets the ball over the keeper and scores. 2-2!

Maiden Erlegh’s Lily Edgar hits from outside the box but just grazes the post after the keeper touhes it away.

Maiden Erlegh get another goal. The ball was brought forward by Rachel Newborough and cut back to Abigail Reed who hits it to the right of the keeper. Maiden Erlegh 3, Laurence Jackson 2.

A few half chances from both sides but the final whistle is blown and Maiden Erlegh from Reading are crowned National Champions and retain the cup for another season.

For photos and a match DVD please visit RWT Photography.