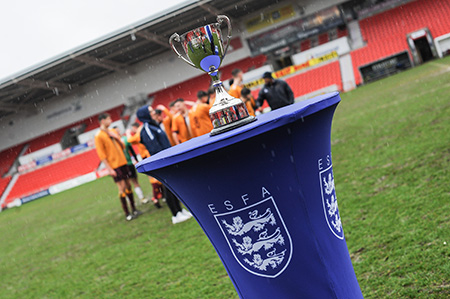 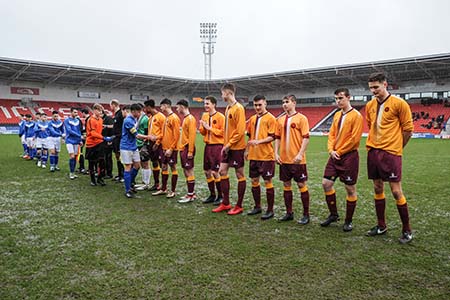 A 12pm KO saw the Under 18 Schools Cup for B Teams Final on the Keepmoat pitch, with Glyn School taking on Thomas Telford School. The game opened with Glyn taking control in the opening phases, with Tom Sullivan dropping deep to link the play and eventuality leading to a chance for Tom Greenhead to turn and shoot from the edge, however the Thomas Telford goalkeeper stopped the chance low to his left. Glyn continued to create the better of the chances and created another good chance for Tom Greenhead after playing the ball out from the back. Thomas Telford grew into the game slowly and after twenty minutes started to show real threat, they worked the ball in behind the Glyn defence with a deft chip from Kieran Cook to put Jeremiah Opoku one on one with the goalkeeper, but the linesman would flag for offside. Thomas Telford's improvement would begin to pay more dividends as they worked the ball behind the defence in wide areas with precise through-balls and effective fullback overlaps. However, the potential attacks were thwarted through the dynamic covering play of Sam Bromley of Glyn School, who was tasked with covering the Thomas Telford breaks. 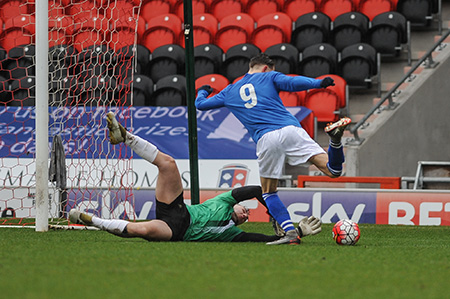 As the game went on, the rain only worsened. Kieran Cook, the Thomas Telford captain, would display his own technical ability as he became the key creative outlet in the game. His quick feet wide on the right would gain Thomas Telford a dangerous free kick in 30th minute, which would see a play from the training ground flash narrowly past the post. It was then to Glyn captain Boe Fowler who crafting a good chance for Adam Gordon whose shot was saved with the rebound heading over the bar from a looping header. With only three minutes left in the half, the rain eased off enough for a game of football to break out until half time. Both sides were pushing their opponents high on the pitch and looking to interrupt the opposition passing. This would prove fruitful, moments before half time for Thomas Telford, breaking the deadlock through Kieran Cook. Cook pressed Sam Bromley and managed to steal the ball from him before finishing coolly past the Glyn Keeper into the bottom right of the net. 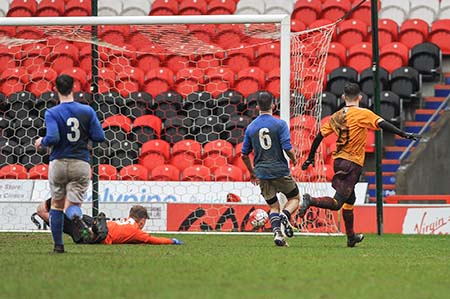 The teams returned to the pitch for the second half as Thomas Telford looked to hold onto their lead with the rain pouring harder than before, with both teams looking to adopt a more direct approach to the game. It took ten minutes into the half before the first chance would arise and would see Thomas Telford put the ball in the net. Keiran Cook continued to have a major impact on the game as he teed up Jeremiah Opoku to head home, however, the goal was ruled off as the attacker was offside. The teams continued to battle against the conditions with the game becoming very combative as the teams fought to find an edge. 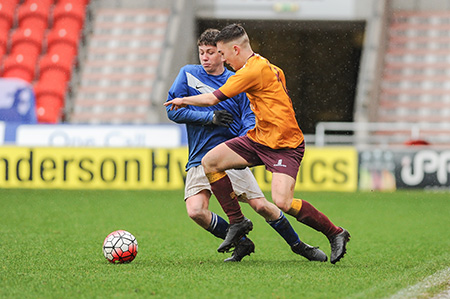 It would, however, be Thomas Telford that would double their lead with only ten minutes left to play. Joe Rigby and Josef Pratt combined effectively down the left flank to work space for Luke Rowlinson inside the penalty area and finish calmly to give Thomas Telford a 2-0 lead. The second goal brought Glyn School to life, with a jolt who began pressing their opposition for the rest of the match. A matter of minutes before the close of the game Glyn pulled a goal back from a free kick, which was floated into the back post and would be headed home by James Mansfield. Glyn continued to pour forward in waves of attack that would ultimately prove to be futile, as the referee's whistle crowned Thomas Telford as champions. 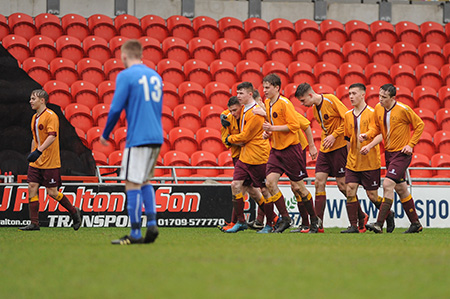 The ESFA would like to congratulate Thomas Telford on their new Under 18 B Team Champion title and give particular note to their captain Keiran Cook for an outstanding performance on the day. 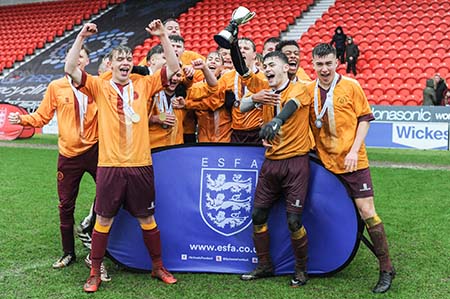 The second game of the day was due to see Repton School play against Millfield School in the Under 18 Schools' Cup for Boys. Unfortunately, the decision was taken to postpone the game to protect the condition of the pitch and to ensure the players' safety. The rearranged fixture will be announced as soon as possible on the ESFA website and over social media.

Thanks to 353Photography, photos are available here