Walbottle through to U13 North Final 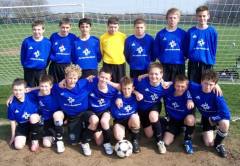 On a bright warm day Walbottle started brightly and pushed Acklam back into their own half for the first ten minutes of the match.  Knight turned his marker and was fouled after fifteen minutes, and his twice taken free kick from just outside the area whistled over the bar. The home team also had an outlet on the right wing, with Norris regularly beating his direct opponent and crossing into the box.  Acklam, however, defended stoutly and were difficult to break down, choosing to break quickly and in the 25th minute forced a good save from Walbottle keeper, Wall.

The second half was a bruising affair, both sides tackling hard and breaking up the play. The pace of the game intensified as Walbottle should have scored from a chipped free kick on the half way line, the ball falling to Luke who struck the keeper with the goal at his mercy.  Gabrial replaced Howlett and added an attacking option on Walbottle's left.

The game's key moment came in the 48th minute. Knight played the ball to himself from the halfway line, lobbing the defender, running past him and chased the ball against the onrushing keeper. Knight chipped the keeper, the ball bounced high and goalbound only for an away defender to scoop the ball away with his hand. After a delay, Knight hit the penalty low and under the Acklam Grange keeper to give his side the lead.

The game continued in the same vein - competitive and fast flowing - with Acklam throwing more and more players forward. Acklam should have equalised in the 57th minute, a header being brilliantly parried up in to the air from Wall, the ball then falling and landing on top of the bar, then dropping to an onrushing forward who missed from two meters out. The chance missed, Walbottle played out the four minutes of stoppage time in relative comfort, and claimed their place in the Minute Maid Northern Schools' Cup Final.

The school now qualify for the Northern Schools' Cup Final to be played at Darlington FC 96.6 TFM Arena on Friday 27th April. In the final they will play either Cardinal Heenan Sports College (Liverpool) or Urmston Grammar School (Greater Manchester).