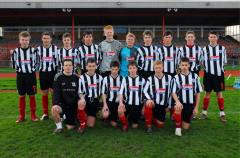 esfa.co.uk continue to follow the progress of The Lindsey School and Community Arts College, who have made it through to the quarter finals of the ESFA Under 15 Schools' Cup for Boys after a 2-1 victory over High Arcal School from Dudley.

The TLS squad, still on a high from a fantastic victory in Barnsley in the previous round, were itching to get on the pitch after last week's postponement of the game due to a waterlogged pitch. Coach Mr Allenby kept faith with the same team that won in Barnsley, with Luke Dawson and Tom Parker preferred to Jack Stewart and Ryan Kelsey.

The match kicked off in bright sunshine at King George V Stadium, and Lindsey were straight on the front foot with Luke Fanthorpe and Ryan Gilby working well down the channels. Coming up against a physical outfit from Dudley, Lindsey were struggling to find their passing rhythm against the more direct play from the visitors.

As the half progressed High Arcal began to enjoy possession in Lindsey's half, and they were unlucky when they struck both the post with a close range effort, and with a 25 yard screamer that clipped the bar.

This passage of play awoke Lindsey, and they were unfortunate not to have taken the lead when Joe Hutchinson twice had the ball in the net, only to be ruled out for offside. Hutchinson was not to be denied though, and after breaking the offside trap and he calmly steered the ball beyond the keeper's grasp to give Lindsey the half time lead.

In the second half Lindsey looked to cement their lead, and the midfield duo of Will Sinclair and substitute Jack Stewart began to dominate the proceedings. With Tom Heaton and Ryan Kelsey solid at the back, Billy Westerman and Hutchinson both went close for Lindsey.

With ten minutes to go the game was effectively over when Billy Westerman skipped past two defenders and coolly slotted the ball home, to the delight of the small band of supporters located in the King George V stadium.

There was still time for High Arcal to grab a late consolation goal, but it was too late to force extra time, and the result sent TLS into the Quarter-Finals of the National Cup for the first time in their history. Tom Heaton was awarded Man of the Match for a brilliant game at centre-half.