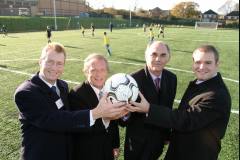 As part of the school's community remit they are home to Blackburn Rovers Girls' School of Excellence and the successful Blackburn Rovers Ladies Team. Lancashire FA also make use of the facilities for their coaching courses, as do the District Schools' FA Representative Team.

The Blackburn based school are also a venue for a whole variety of junior grassroots football teams. Any enquires for potential community use on a Saturday for U16 affiliated groups please do not hesitate to contact school on 01254 202519 ex 278 for further information.

The completion of the new 3rd generation all weather pitch artificial floodlit football pitch is a tremendous new facility that will offer enormous benefits to the school children of Blackburn and Darwen. This exciting new project was opened by Gordon Taylor Chief Executive of the Professional Footballers' Association. The pitch, imported from Canada was funded by the Football Foundation, Blackburn with Darwen and the school.