Emmanuel through to U13 SW Final 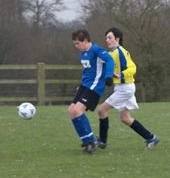 Dorset champions Emmanuel Middle School played host to local rivals Bournemouth School for Boys on Friday 23rd March in the third round of the Minute Maid South West Schools' Cup boys' tournament. The match was a repeat of the Dorset County Cup final which Emmanuel had won 2-0 a few months earlier.

Emmanuel were expecting a much harder game this time around and so it proved with the Bournemouth side forcing a series of early corners and the Emmanuel team struggling to find their rhythm. Defensively though Emmanuel were able to cope with the early pressure with captain Corby Moore outstanding in the air against the much taller Bournemouth attack.

Clear-cut chances for either team was few and far between with the best chance of the half falling to Billy Maybury of Emmanuel but he got the ball stuck under his feet and was unable to get his shot away.

Emmanuel were much improved in the second half and had the Bournemouth goal under pressure straight away. Eric Marshall was denied on three separate occasions, first from a smart save by the Bournemouth keeper, secondly by the post form a close range shot and he put his third effort just wide. Striker Billy Maybury also went close with a 20 yard shot that went just wide.

Substitute Sam Sheppard replaced Eric Marshall with about 15 minutes remaining and made a good impact on the game going close with an excellent header which was, unfortunately for him, hit straight at the keeper.

At the back for Emmanuel, Corby Moore was again outstanding and dealt with everything that came his way, in the air or on the deck. The Emmanuel keeper had very little to do during the second half. Neither team could find a goal though and full time finished 0-0 so the game went into extra time.

Emmanuel decided to change formation to 3-5-2 to allow captain Corby Moore to play in his preferred position of central midfield, which he plays for Southampton. This change had an immediate impact and early in the first half of extra time he played a through ball for striker Billy Maybury to run onto and he managed to round the Bournemouth defence and hit the ball past the keeper towards the goal. The ball was heading in but fellow striker Sam Sheppard decided to make sure and claimed the goal for himself with a tap-in from about a yard.

Emmanuel switched to 4-5-1 and were expecting Bournemouth to attack for the remainder of the game and they didn't disappoint. With about 3 minutes left on the clock in the second half of extra time Emmanuel failed to clear a throw in properly and one of the Bournemouth players hit a superb 15 yard shot into the top corner of the net to level the match and penalties looked certain to decide the match.

Emmanuel though had other ideas and straight from the kick off the ball went left to Sam Wrixon who played a superb through ball round the back of the Bournemouth defence and striker Billy Maybury latched onto it and coolly slotted the ball past the keeper with the outside of his foot to score a superb winner no more than 10 seconds after everyone thought the game was headed for penalties!

The remaining few minutes felt like an eternity for the Emmanuel players and the supporters watching but the team held out to deservedly win a very tough game 2-1 and reach the South West Regional Final. Victory in this Final, to be played at Cirencester Town FC on 26th April, will see the schools become Regional Champions and therefore qualify for the National Semi-finals and possibly even the National Finals.