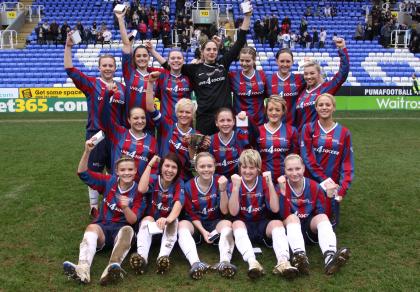 Balby Carr took an early lead on 3 minutes through Jenny Knibbs.  However, their lead did not last long as Danielle Puddefoot put John Madejski Academy back on level terms after 10 minutes.  Francesca Kirby then put the JMA in the lead on 23 minutes, much to the delight of the local crowd.  No further goals were scored before half time depsite chances at both ends.

Balby Carr came back strongly in the second half and soon drew level on 52 minutes, courtesy of a Becky Kendall strike.  Balby struck again soon after on 55 minutes thanks to another well taken effort from Jenny Knibbs.  Jenny Knibbs then proceeded to complete her hatrick on 66 minutes, a goal which took her tournament total to eleven goals in eight matches.

Beth Smith then made it 5-2 to the Doncaster outfit, before Lauren Rodway made it six in injury time.

ESFA Chairman, Paul Rickard, was on hand to present the trophy to the Balby Carr Captain, at the end of a fantastic advert for girls' football.

Photographs and a Match DVD can be purchased via www.rwt-photography.co.uk