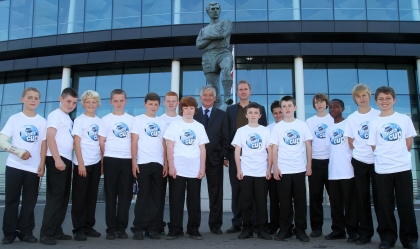 Chairman of The Football Association, David Bernstein, yesterday (28th September 2011), welcomed to the FA Headquarters in Wembley the U12 England Team who will be representing England in Madrid in the World Finals of the Danone Nations Cup, the biggest World Cup for kids!

The World Final of the Danone Nations Cup will take place on October 6th-9th in Madrid. 560 children from 40 countries will meet for the qualifying stages which will take place from October 6th to October 8th in the sports village of Valle de las Cañas (Pozuelo de Alarcón). On Sunday, October 9th, at the legendary stadium Santiago Bernabéu, home of Real Madrid, the World Final will be played in the presence of the emblematic international ambassador to the Danone Nations Cup, Zinédine Zidane.

The England Team is made up of eight players from Cardinal Heenan Sports College (Liverpool Schools' FA) and five players from the Lancaster School (Leicester Schools' FA). These thirteen school children will have the once in a lifetime opportunity to experience competitive sport at an international level. They will be competing against 40 other countries from around the World with the hope of lifting the prestigious Danone Nations Cup Trophy. As part of their visit to Wembley, this young England Team were also be taken on a tour of the National Stadium and received a training session from John Scales, ex-England, Liverpool, Tottenham and Wimbledon professional footballer.

Endorsed by FIFA, the Tournament is a celebration of sport which brings together over 2.5 million children in the early rounds from 40 different countries. Around 700 English Schools competed nationally in the ESFA Danone Nations Cup which is aimed at encouraging an active and healthy lifestyle for kids. Cardinal Heenan were the eventual winners of the domestic competition, lifting the trophy at Craven Cottage, home of Fulham FC in May. The notoriety of the Danone Nations Cup has been reinforced over the years by the involvement of well-known ambassadors, such as Cafu in Brazil, Deco in Portugal and Hagi in Romania.

For this competition, Danone has a clear objective: to offer a chance to reach out with their dream to as many children as possible. More generally, the Danone Nations Cup facilitates the promotion of practicing sports and their values among younger people and their families. This commitment is part of Danone’s mission: to provide health through food to as many people as possible.

As part of the plan to see every Country play host to the competition, last year’s final was staged in Johannesburg. The culmination of a very successful tournament saw the home nation lift the trophy.

Through the competition The Danone Nations Cup provides an amazing opportunity for children, schools and countries to compete in their chosen sport at the highest-level.

After the tour of Wembley, David Bernstein, Chairman of the FA, commented, “The FA was delighted to welcome the England youngsters to Wembley Stadium today and wish them every success at the Danone Nations Cup in Spain”.