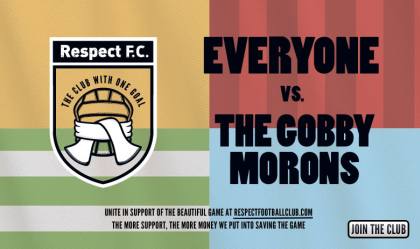 The Football Association has taken a radical new approach to tackling bad behaviour from fans and players by launching its own football club Respect FC. The aim of the club is not to win silverware or secure a Champions’ League place; its goal will be to unite fans against the ugly side of the beautiful game to create a safe and enjoyable environment in which it can take place.

Appointing comedian and avid Bristol City fan Mark Watson as Chairman, the Club has been founded through concern from both the top level of the game and the grassroots community around abuse towards referees and poor sideline behaviour. Respect FC is not your usual football club; it’s a football club made up of people from all walks of life, with one collective goal – to bring Respect back to the game we all love.

For every fan that joins Respect FC, The FA has pledged to put £1 back into the Respect initiative within grassroots football (up to the value of £50,000). Members of the Club will be able to vote online at www.RespectFootballClub.com to say how this money is used at the end of the 2010/2011 season.

Respect FC is not just about raising awareness; it’s much more than that. Everyone who is involved in the game in some way is aware of poor behaviour and knows that – be it towards referees, players or fellow fans – it is wrong. The challenge now is to unite, change people’s attitudes and make them realise that verbal and physical abuse are not acceptable in the game.

Respect FC Chairman, Mark Watson, said: “We know that it’s so much easier to take a stand against poor behaviour if you are not on your own, if you have someone else on your team. Collectively we can stand up to the gobby morons. If you’d like to show the people spoiling our game, what they’re up against go to RespectFootballClub.com to join my new football club, Respect FC, the club with one goal – to rid the game of the gobby morons.”

Alex Horne, FA General Secretary, said: “Football fans from all clubs and all leagues have a collective responsibility to let others know that they will not stand for this behaviour from the grassroots of the game up to the international stage. That’s why we’re asking everyone, to ask everyone, to join the club and together win the match against bad behaviour.”

Latest research from The FA has shown that 45% of players, coaches and referees think the Respect programme has improved their experience of the game.The majority of participants surveyed were also aware of the Respect programmes key objectives with 68% recognising that Respect aims to create a safe and enjoyable environment for the game.

Fans are encouraged to log onto www.RespectFootballClub.com and register their support to unite against the ugly side of footy.