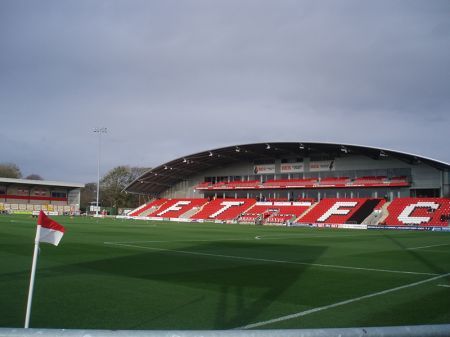 The English Schools’ Football Association are thrilled to announce that friends of the Association, Fleetwood Town FC have agreed to host this season’s first inspiresport Centenary Shield match against Scotland Schoolboys on 1 April 2016.

This match will mark the first of two home fixtures to be played by the newly formed ESFA U18 International England Schoolboys team in the Centenary Shield competition, in its second year of sponsorship by youth sports travel company, inspiresport.

Mike Spinks, ESFA Chairman said ‘England versus Scotland is always one of the great fixtures in the football calendar. It will be no different for the England Under 18 footballers when they take on their opponents from over the border next April. We look forward to seeing supporters coming along to be part of a great International occasion.’

The match is all set to take place at Fleetwood Town’s Highbury Stadium on Friday 1 April 2016 with a 7pm kick off. The match will mark the perfect opportunity to visit a top notch stadium and watch some budding future stars of the beautiful game compete to champion all other home nations in 2016.

Martin Booker, Head of Commercial at Fleetwood Town said. “We are delighted to host the Centenary Shield at Highbury Stadium. We look forward to welcoming both teams and fans to watch this international match at Fleetwood Town FC and hope fans come and support the teams and the occasion. This is a great coup for everyone connected with the club.”

Tickets to be part of this fantastic opportunity are available to order now as below:

Tickets are available to order from Fleetwood Town FC by calling their ticket hotline on 01253 775080 (option 1) or visiting their website to book match tickets.

The ESFA wish the best of luck to both England and Scotland Schoolboy teams in this first leg of the competition!