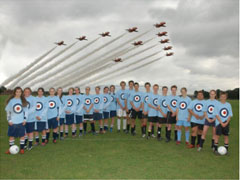 The Royal Air Force will be sponsoring the Individual Schools' Under 16 Cups for the next three years.