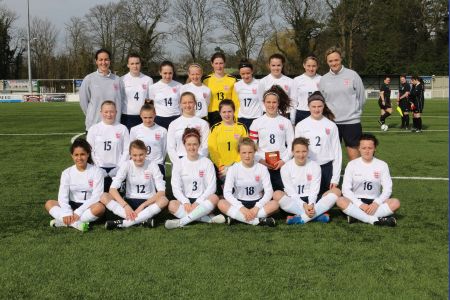 Former ESFA U15 schoolgirl, Georgia Stanway has this weekend been announced as part of Phil Neville’s England squad, set to play in the USA’s SheBelieves Cup

Stanway, who was part of the ESFA English School Girls winning U15 team in 2014, has been announced as a Lioness this weekend, following the withdrawal of three experienced players from the squad for the SheBelieves cup. Having represented Cumbria Schools’ FA, Stanway was put forward for ESFA England trials in 2013 and was successful in making it through to the 2014 ESFA England Girls’ Squad, for Georgia’s first chance to represent her country. That year, the team were victorious in the Bob Docherty competition, with Stanway scoring a goal in each of the group games and helping to see the team through to become victorious.

Her performance in the competition helped her to move from Blackburn Rovers to Manchester City, where only a year later, she made her first team debut as a substitute in a 5-0 win over Durham in the Continental Cup. A couple of months later she scored her first goal as Everton were defeated 2-0 and at the end of her debut season, she was crowned the club’s rising star, scoring 2 goals in 5 appearances.

2016 was an even better season for Georgia winning the goal of the season appearing 13 times with a return of 5 goals. But internationally was where her career really developed, captaining an U17 English side to a bronze medal at the Euros. Her year was topped off with a nomination for the BBC’s Young Sports Personality of the Year. In her time in the U17’s she scored 23 goals in 27 times and replicated similar form for the U19’s scoring 6 goals in 7 games.

2017 was another good season for Georgia winning the FA Cup and being nominated for PFA Women’s Young Player of the Year, however 2018 could prove to be her best year yet, with her recent England first team selection. Neville said: “When I named the squad I mentioned there were some exciting players pushing hard for inclusion. While we are sorry to lose three experienced names, this is a brilliant opportunity for Rachel, Abbie and Georgia. It also means I get to see at first hand some of those who will be pushing the more established players for a place in our World Cup plans.”

The English Schools’ FA wish Georgia all the very best in the upcoming SheBelieves Cup.