Over the weekend, 32 England Schoolboy hopefuls took part in the final trial for the Under 18 England Schoolboy Squad. The trial, held at Lilleshall National Sport Centre, saw the 32 boys have their credentials tested against one and other and against teams from the RAF and Royal Navy. The match reports can be found here. Following this process the final selection for the squad has been made and the final team selection follows.

The ESFA would like to congratulate the 18 boys who have made the team and look forward to working with them for the rest of the season. We would also like to thank all of the players that took part in all stages of the application and wish them the rest with the rest of their season. 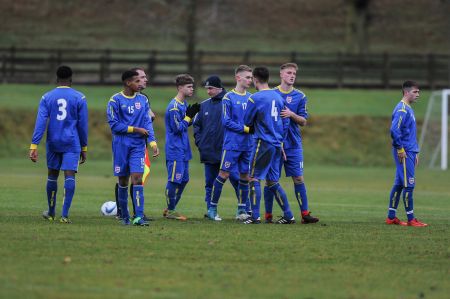 The Under 18 Boys will be playing in the Centenary Shield this season with two home match and two away matches. The home games will be against the Republic of Ireland on Friday the 16th of March at Luton Town FC and against Scotland on Friday the 23rd of March at York City FC. There will be away matches played against Wales on the 29th March in Cardiff and against Northern Ireland on the 6th April.

Thank you to Garry Griffiths of ThreeFiveThree Photography for providing photos of the event. Photos are available to purchase on his website.