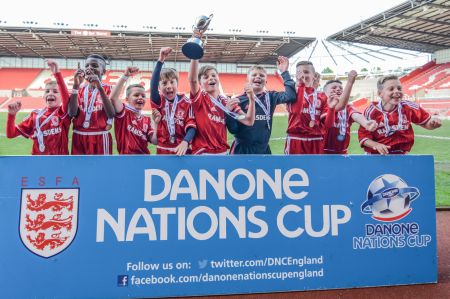 England’s hopes of securing international silverware this year rest firmly on the shoulders of twelve 11-year-old schoolboy footballers from Middlesbrough who, on Saturday made their final preparations before representing the nation in the 25,189 capacity Red Bull Arena at the Danone Nations Cup World Finals.

On Thursday September 21, the team will board a plane to New York Metropolitan Area to compete in the world’s biggest football tournament for 10-12 year olds alongside 32 other elite national sides. However, before then, their final preparation includes watching their senior counterparts with a very special invite to watch Middlesbrough V Queens Park Rangers at Middlesbrough Riverside FC, as guests of Middlesbrough FC and Middlesbrough Academy on 16 September.

The team, captained by Charlie, held a final training session at the Rockliffe Park Training Complex, where the boys were in high spirits before their once-in-a-lifetime trip to the US east coast. The three-day competition will see them take on the best young footballers from South Africa, Indonesia, and the United Arab Emirates in the group stages before the knockout rounds start. The final will take place on Sunday 24 September at the Red Bull Arena, New Jersey. 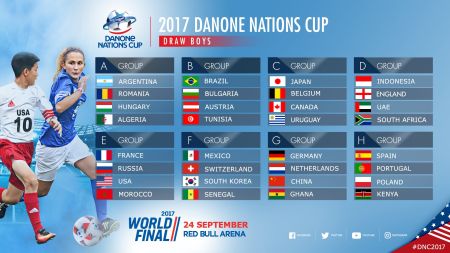 The dream trip to the States will be the final leg for the team in a journey spanning more than nine months and more than 50 matches, longer than any FA Cup run. Middlesbrough PSFA triumphed in the county knockout rounds and the following North regional final before heading to the English final of the tournament, which saw them lift the National Cup at the Stoke City FC stadium in May within the English Schools' FA U11 competition structure.

Marie Wendling, PR and Events Manager at Danone, says: “The local community has been behind the team from the very start and now their dreams are becoming a reality. Team England has had a great training session this afternoon and it looks as though we are heading into the tournament in great form.

“Middlesbrough FC and Middlesbrough Academy have been nothing but supportive and very kindly invited the whole team and their families to watch the match against Queens Park Rangers. Having them walk onto the pitch at halftime and seeing the local fans cheer them will hopefully give them the boost they need to go far in the Danone Nations Cup World Final.”

Former Tottenham, Liverpool, and England centre back John Scales, ambassador of the tournament, adds: “The team have been giving 100% to get to this point, and they have what it takes to go all the way.

“I am so proud to have so closely supported the Danone Nations Cup for more than 10 years now. It's a truly remarkable project that brings joy to thousands of kids across the nation. Being active, eating well, having fun, and working hard as part of a team are the fundamental pillars of the tournament and we expect to see these on show at this year’s World Final.”

Each year 2.5m children worldwide take part in the competition, which is supported by its international ambassador and former World Cup winner Zinédine Zidane, with 3,000 schools competing in the English leg run by the English Schools’ Football Association.

The Danone Nations Cup is a unique FIFA-approved tournament, which represents a once-in-a-lifetime opportunity for young players. It is an annual highlight in Danone’s ongoing programme of support for healthy lifestyles through education, fun, and fairplay, which includes its ‘Eat Like A Champ’ healthy eating initiative.

Not only is the tournament endorsed and supported by great ambassadors, the level of football is also very high, and many players go on to have successful professional careers. Previous participants include Bournemouth’s Benik Afobe, West Ham’s Manuel Lanzini, Tottenham’s Erik Lamela, and in-demand Arsenal striker Alexandre Lacazette, who all played in the Danone Nations Cup.

The English Schools' FA would like to wish Middlesbrough luck in the coming World Finals - you can keep up to date with their progress by following the ESFA on Twitter and the whole tournament via the Danone Nations' Cup online.