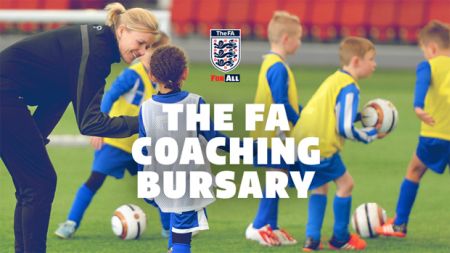 Hurry – you only have until 18 September to apply

The FA has opened the application process for the next FA Grassroots Coaching Bursary – an initiative, designed to support aspiring coaches from under-represented communities to take the next steps on their coaching pathways.

Jointly supported by Sport England the programme provides female coaches, as well as male coaches from Black, Asian and Minority Ethnic backgrounds with a financial contribution towards their FA Level 3 (UEFA B) in Coaching Football course.

Wayne Allison, FA coach inclusion and diversity manager, who runs the bursary programme, said: “I’m really pleased we’re in a position to launch this funding initiative for its third year.

“We have now seen a large volume of excellent UEFA B hopefuls apply and receive bursaries so it’s fantastic that we can again offer this to even more under-represented, aspiring coaches.

“The FA Grassroots Coaching Bursary was developed to support the aim of increasing diversity among FA UEFA B qualified coaches in England while also increasing the talent pool from which clubs can pick their managers and coaches.

“We want to open doors to those learners that have traditionally faced barriers.

“If you’re a coach from an under-represented community and think the programme could be beneficial please do apply. It really can make a difference to your development.”

Amber Wildgust completed her FA Level 3 (UEFA B) in Coaching Football in 2016 utilising her Grassroots Coaching Bursary: “After completing my FA Level 2 I was a little apprehensive about going onto my UEFA B but the bursary programme gave me the confidence and drive to step out of my comfort zone.

“The course was great and I received a lot of support from my tutors and peers. I was also allocated a coach mentor in my area who came out to my club and offered support with my log book and practice for my assessment.

“Since completing my FA UEFA B a lot more coaching opportunities have opened up for me and I would highly recommend the bursary to anyone looking to take the next step in their coaching journey, utilisingall the support available”.

The application process is now open and will close on 18 September 2017.

Find out more or apply for The FA Grassroots Coaching Bursary here.