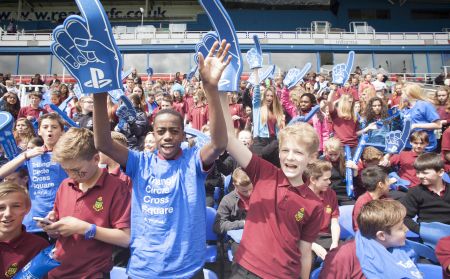 Some of the most talented young footballers in England will be under the spotlight later this month with 15 national schools football finals broadcast live in HD from the English Schools’ FA (ESFA) PlayStation®Schools’ Cup Festival.

All games will be given the full professional live TV treatment with multiple camera angles, instant replays and a commentary team including former England and Liverpool defender John Scales.

Staged at Reading FC’s Madejski Stadium from Monday 16th May to Wednesday 18th May, all 15 finals can be viewed live at www.playstationschoolscup.com. The coverage will ensure that spectators can enjoy the matches live from the Madejski Stadium, as well as schools and communities from around the country being able to log on and support their local teams. All viewers will be invited to show their support using the hashtag #PSSchoolsCup, tweeting @PSSchoolsCup and @SchoolsFootball and viewers and spectators alike can also enter the returning #SchoolsCupSelfie competition which saw people all over the world sending in pictures supporting their team!

The PlayStation Schools’ Cup Festival is the season finale of the grassroots football partnership between PlayStation and the ESFA. The partnership encompasses all schools’ football tournaments within U12 to U15 age categories and has so far seen over 2,000 teams and 150,000 players participate.

The Festival is being staged at the Madejski Stadium for the third consecutive year. With free tickets and a host of activities and competitions laid on for supporters, last year’s event was attended by over 6,000 spectators, creating a carnival atmosphere. The support was further extended with over 50,000 people tuning in to watch the Web TV action, and the 2016 Festival promises to be the most exciting yet.

We hope to see you there!