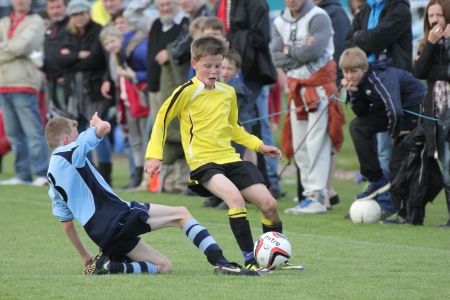 Stakeholders within the national game will be fully aware that the FA Youth Review’s implementation is now in full swing and the next phase involves the format of the game at the primary school age group. Despite this information being circulated on numerous occasions by The FA, County FAs and the English Schools’ FA, we are still receiving a number of enquiries due to uncertainty surrounding the competition pathway at the primary age group.

Therefore, the ESFA is issuing this update in an attempt to clarify the position relating to youth football as directed by The Football Association.

From season 2015/16, the following competition pathway will be in place:

This player pathway will lend itself to the development and learning of our young players as they prepare their progression into the 11v11 game.

Under 7 and Under 8
Even the youngest children will benefit from having the opportunity to play for a little cup, two or three times a season. Children of this age are very ego-centric and can only see the ‘here and now’ and certainly not the outcome of something in eight months’ time. This competition can take place over a two-week period and, for example, can include a little knockout cup event. This means that over a typical 26-week season, six weeks of this will be focused competition.

Under 9 and Under 10
As children grow developmentally and cognitively, the periods of competition can increase a bit further as their views of the world start to widen. They can start to interpret results in a more meaningful way. This competition can take place over a four-week period and, for example, can include group stages and a cup final. This means that over a typical 26-week season, 12 weeks of this will be focused competition.

Children can now start to understand whether a team beats them because they tried harder or they were better players, something they can’t often do before this age. As they prepare for secondary school, peer influences start to come into play. This competition can take place over a six-week period and, for example, can include a Champions League style event. This means that over a typical 26-week season, 18 weeks of this will be focused competition.

What is a trophy event?

Leagues cannot publish league tables throughout the season up to U11 as part of the new approach to a child-friendly competition. However, they will be able to promote and publicise the winners of the different competitions.

This will allow recognition of winners where appropriate but without the pressure of three points and goal difference on the children every week for 26 weeks. The FA has found from research that one of the main reasons children drop out of football is due to increased pressure from adults on the expectations to win every week.

Being creative with competition and building development as the children get older is a great way to keep children playing football longer.

Furthermore, this variety will give children the excitement of looking forward to what happens next – the new format of the game and new competitions to play in!

Festivals and Round Robins:

For those that like to plan ahead or who may be linked to a league development plan this is what the complete pathway will look like by the 2015/16 season for youth football in England. This will be the complete pathway once all the changes have been phased in. This will provide a robust and child-friendly system that allows progression and enjoyment for all young people.

Whilst this will be the proposed pathway in 2015/16 season it is important that development systems continue to evolve and develop. For too many years youth football in England hasn’t evolved at the same rate as the game has. There needs to be a commitment to embrace change and continually develop the game to suit youth football.

Changes to Laws of Mini-Soccer, 9v9 and 11v11 will continue as we constantly strive to afford young people the best opportunity to develop and improve.

All key people involved in the game need to embrace these developments in the best interests of young people, constantly putting children’s interests before our own.

The following resources are available to download at www.esfa.co.uk/development

More details regarding the FA Youth Review can be found at