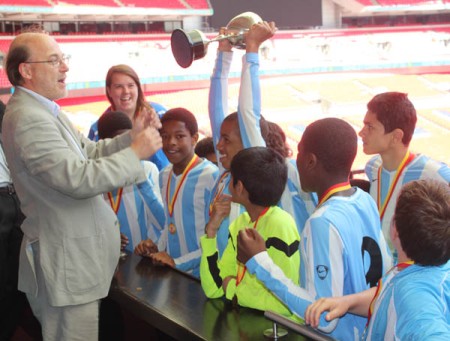 Following their success in winning one of the closest Compton Cup competitions in recent memory, the Brent Under 13 squad were given a unique opportunity to collect the trophy at Wembley Stadium.

Brent had steadily improved throughout the season and achieved their success through a fine run of form that took them to the top of the League after Christmas, where they stayed despite stiff competition from Hillingdon and Harrow. The squad also won the London Cup along the way.

In recognition of their achievement, The Wembley National Stadium Trust (WNST) and The FA invited the team to be presented with the Compton Cup at Wembley Stadium, in similar fashion to that when Arsenal lifted The FA Cup in the Royal Box last month.

The team was treated to a tour of the stadium before following in the footsteps of their football heroes and many football legends by climbing the 107 steps from pitchside to The Royal Box where Stewart Goshawk of The WNST presented the team with medals and Captain Cai Burrows with the Cup.

The day was a fantastic occasion which took place on a hot sunny day more like Brazil then Brent. Coach Chris Ampofo was delighted; “It was a wonderful end to a great season. Huge thanks to The FA and Wembley National Stadium Trust for honouring Brent schools football in this way. The players are really happy. It is an unforgettable occasion that they will treasure forever”.