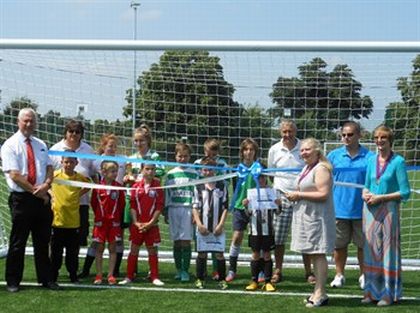 Moulsham worked in partnership with the Essex County FA to secure a £323,017 grant from the Foundation and they can now utilise the pitch for 11v11, 9v9 and 7v7 games during school time. It will also be used by partner clubs as well as being offered for external hire. The facility was officially opened at a ceremony on Saturday 6th July, where County FA Council Member David Emerton presented a commemorative plaque.

The tournament included Moulsham’s partner club youth teams - Galleywood, Writtle Minors and Springfield - as well as matches between ex-Moulsham students, a staff team and ‘Partner Club Vets’ who took on a side including former Chelsea FC players. Mark Farmer, Head Teacher of Moulsham High School, said: “We now have a fantastic new facility for students which will also be of benefit to the local community and the City of Chelmsford as a whole.”

“We look forward to supporting the development of local talent and local clubs and building on our relationships with all our hirers.We would like to thank the Football Foundation, the Essex County FA, the local community and the local clubs who have supported the school from the initial planning stages through to the completion of the new pitches.”

Paul Thorogood, Chief Executive of the Football Foundation, added: “It is so rewarding to see this new facility completed and ready for use by the local community. Alongside the Essex County FA, Moulsham High School have worked extremely hard to ensure this project has come to fruition and deserve great credit for its endeavours.”

“This project in Chelmsford is a wonderful example of what the Football Foundation is doing right across the Country. Foundation investment is helping to transform thenational inventory of facilities which supports the grassroots game. Thanks must go to our funding partners, the Premier League, The FA, and the Government - via Sport England - for their crucial and generous financial support, without which none of this would be possible.”

Since they were launched in 2000, the Football Foundation have awarded around 9,000 grants worth more than £420m towards improving grassroots sport, which have been used to attract additional partnership funding of over £520m. For details about the Foundation’s work, visit www.footballfoundation.org.uk