This first game for the ESFA U18’s proved to be very competitive with both teams giving 100% and the English lads making life very difficult for the vastly more experienced Valencians. A compelling first half threw up some good performances with the English midfield enjoying the upper hand for long spells defensively but they found penetration of the well marshalled Valencia defence quite awkward. The half time score of 0-0 did not reflect the excitement of much of the first period.

A quick break early in the second half saw Valencia take the lead but England were eager to fight back and forced a series of corners which were defended vigorously. Another break by the home team to a strategically placed offside forward resulted in a second goal for Valencia much against the run of play. England continued to push hard but the Valencia goalkeeper ensured that his clean sheet was not to be compromised.

Overall, a very good first performance from the ESFA team which left manager, Andy Buckingham, suitably optimistic for the games ahead. 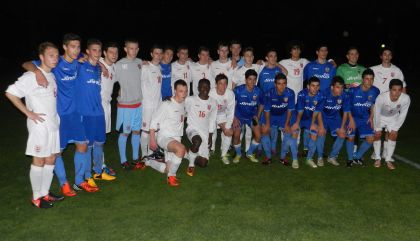 England & Valencia squads after the match