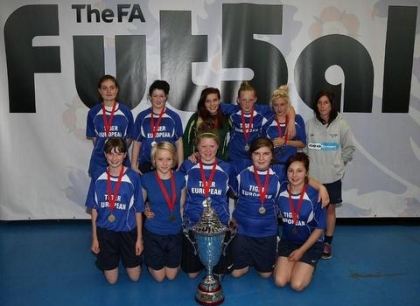 Another weekend of Futsal action came to a close in July as the 2012 FA National Youth Futsal Festival was played out at the National Futsal Centre in Birmingham.

It was a weekend of thrills, spills and fabulous Futsal action, showcasing the best young teams from around the country and potentially, some of the nation’s future stars at both Futsal and Football in the process.

This year that was more difficult than ever, with 25 County FA run heats with an average of 46 teams per heat with a total of 530 boys’ and 540 girls’ teams competing in initial qualifying events overall, before progressing through to one of eight Regional Finals, giving the children a fantastic opportunity to taste finals day Futsal experience.

80 teams arrived in Birmingham across the eight age groups, all battling out for the right to be named National Champions. The level of enjoyment on show was a pleasure to see and gave a real indication of just why Futsal is beginning to grow in this country. The winners and runners of each age category are detailed below:

The standard of Futsal on show in Birmingham was phenomenal and on a weekend where Spain, a giant in the Futsal world, won Euro 2012, the FA National Youth Futsal Festival showcased the level of skill and ability that English youngsters do possess. Every coach, parent and supporter who travelled to Birmingham, will now realise that Futsal is the key to unearthing that talent.