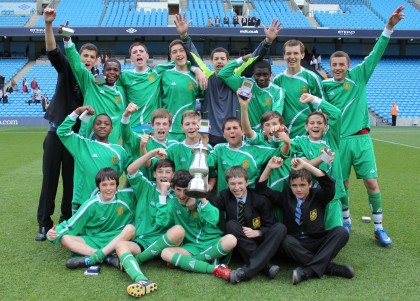 Richard Challoner School from Surrey, the ESFA U14 Champions, found the fourth SAFIB British Isles Championship a stiff challenge on the playing fields of Glamorgan University in Cardiff this weekend. With players missing due to commitments with their club academies the school team decided to shrug their shoulders and just get on with the task at hand.

In Friday’s game against Scottish Champions Musselburgh Grammar School, Challoner’s had a very difficult start to the weekend. The first half was very close with Musselburgh taking advantage of the strong wind behind their backs. Andrew Mills and Ryan Sweeney were dominant in the centre of defence and dealt comfortably with the aerial bombardment. After 15 mins Sean Jewell had to leave the pitch with an ankle injury but the reshuffled defence coped well with the Musselburgh forays. Challoner’s midfield continued to play good possession football with Billy Frost outstanding. The second half saw more action in the Scot’s goal area, Jack Watret going close in the 35th min. The same player forced two excellent saves from the Musselburgh goalkeeper, Steven Howie, in the space of three minutes late on but the game finished in a 0-0 draw. The competition rules need winners and so the game went to penalties with Musselburgh emerging victorious 4-3 after Richard Cassells had his effort saved.

Following on from yesterday’s sun and breeze the players awoke this morning to the sound of rain rattling against the windows and the sight of trees bending in the wind, lines of pylons disappeared over the hills and into a cloud of mist. Yes, they’ve woken up in Wales! The game against Pentrehafod High School of Swansea was played in very awkward conditions with the English boys doing far better when they kept the ball on the floor. The first half was very even with neither team creating any clear chances. Within two minutes of the restart Challoner’s found themselves one down after a fortunate deflection put Jack Price through for a close effort. The game increased in intensity with players giving their all. In the 51st minute Pentrehafod went further ahead when a good through ball found Ryan Hurlow camped out three yards offside which the referee and assistant, who were both up with play, incredibly failed to notice. Despite the setback Challoner’s continued their uphill battle and were rewarded in the 57th Minute when Luke Phillips broke onto an excellent through ball and finished clinically. The fight was on but the clock was against and time ran out for the big hearted Challoner’s team.

It’s Sunday, it’s wet again so we’re still in Wales. The final game against the Irish of St Joseph’s Secondary School, Co. Westmeath, was to be played in the same punishing conditions as yesterday. Challoner’s are looking sluggish and soon find themselves down to an excellent strike by Sam Plant following a weak defensive clearance from a corner. It’s hard and now it has got harder! The setback seemed to wake up the Challoner’s boys and they began to play the good passing game they are capable of. Penetration was difficult and Chris Penton was finding life tough up front on his own. Several chances were created by both sides but none resulted in gold plated opportunities. The game became more open in the second half with Challoner’s having their resolve severely tested when conceding a goal scored direct from a 35 yard free kick from Mark Geoghegan which ‘keeper Robert Russell saw late and was unable to hold. It’s wet, it’s windy, they are two goals down but the excellent spirit of the English boys kept them on task. Cruelly, in the 54th minute a route one ball from the Irish ‘keeper Dylan Doherty caught Challoner’s short at the back and Mikhail Kennedy found the back of the net from 15 yards. A spirited performance, once again, which went unrewarded in goals but exuded great character.