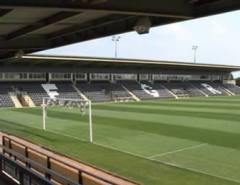 Three Gloucester Primary Schools have been invited to attend the first Blue Square Premier League match of the season, Forest Green Rovers v Kettering Town, at The New Lawn in Nailsworth on Saturday 8 August 2009. The schools will enjoy some pre-match hospitality from the club before a Parade of Champions around the ground and the local supporters’ recognition of their magnificent achievements. The players and their teachers will then stay on, as guests of the club, to cheer the Gloucestershire side to what they hope will be the start of a campaign which will eventually see them obtaining Football League status for the first time.

The 3 schools had battled through to the English Schools Football Association (ESFA) 7-a-side National Finals at the famous Wembley Stadium from a starting number of nearly 3,000 schools. The Wembley Finals took place on Saturday 13 June 2009 when all the Primary National Finalists from around the country took on the challenge of becoming Champions in one of four 7-a-side tournaments the ESFA runs for schools in England. 3 schools from Gloucestershire were involved on the big day: Harewood Junior School were crowned National Champions having won 3-1 in the Final of the Boys competition. The British School lost 2-1 in their Final of the Small Schools competition and Blue Coat C of E Primary School finished 4th in the in the Girls Cup losing 1-0 in the 3rd/4th place play off.