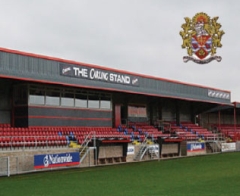 The final of the ESFA U18 Colleges’ Trophy will take place on Wednesday 11 March 2009 at Dagenham & Redbridge Football Club, kick-off 7.00 pm.

Hartpury College (Gloucestershire) have already earned a place in the final after beating Kingston College (Surrey) in a well fought contest, 5-1, on Wednesday afternoon. Hartpury’s goalscorers were Waris (3) and Accam (2).

The other Semi-Final is being played today (Friday 27 February) between Hopwood Hall College (Manchester) and Myerscouch College (Preston).

Anyone that is interested in going to this match is welcome. Turnstiles will be operating on the night with adults entry priced at £3 and concessions at £1.