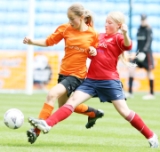 Mixed football is being reviewed

The Football Association, under pressure from the Government, has agreed to investigate the age restrictions to mixed football currently in force in this country. Any junior league which has players up to the age of 14 and above the age of 11 and within the current age group banding (no more than 2 years) may apply to their County FA for permission to play up to 4 girls in any one team for the season 2007-2008 only. If there are a number of leagues in each county applying for this dispensation, the County FA may restrict the number of Leagues given this dispensation. Boys are still restricted to boys' leagues and may not play in girls' football.

The Football Association will:

All of the above does NOT apply to SCHOOLS' FOOTBALL where current regulations remain extant.