The National Finals of the U11 Small Sided Competitions were held on Saturday 16 June at Keele University, which again proved an ideal venue for the competitions.  Playing conditions were excellent considering the amount of rain that had fallen in the previous 48 hours, much to the credit of the Keele ground staff.

The 8 finalists in each of the four competitions ensured that spectators were treated to a feast of high-class skillful football played in an excellent spirit with a high standard of sportsmanship and behaviour with plenty of goals.

The ESFA would like to congratulate the following competition winners: 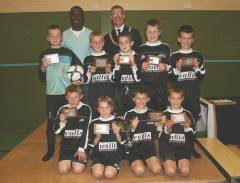 Clifton with Rawcliffe and Andrew Cole 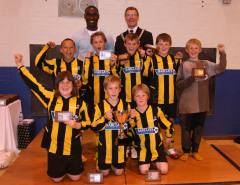 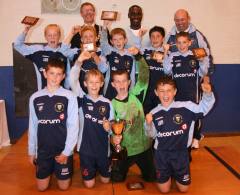 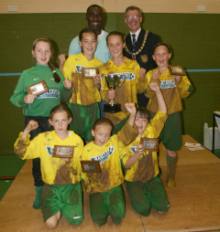 Fair play awards were presented to:

The Competitions were very well controlled by a team of sixteen referees actively involved in Schools' Football, which included a large number of young officials starting out on their careers in refereeing.  Thanks go to:

The highlight of the day for all the young players was, without doubt the attendance of Andrew Cole who, with Chairman Nigel Brown presented the Awards to all players who participated in the tournaments and also to their team managers.  Andrew, a former U15 England Schoolboy International, signed hundreds of autographs throughout the afternoon and was requested for many photographs, which he did without question to the delight of the young players and their team managers.  The ESFA would like to thank him for his positive contribution to the success of the day and for making the event one, which all the young players will remember.

Photographs of the tournament are availble through RWT Photography