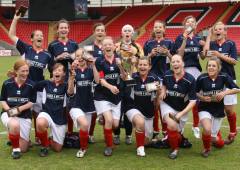 Two goals in three minutes from Chelsea Garrett midway through the first half put the Norfolk school well in command. The first was a free-kick from the edge of the penalty area and the second was a well converted penalty after a Archbishop Beck defender handled in the area.

Alice Ladbrooke sealed a convincing win midway through the second half with another strike from the edge of the area to ensure that Thorpe St Andrew took the Cup back to East Anglia crowned champions of the country for season 2006-07.

U15 Schools Cup for Girls Results