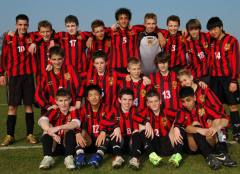 Dame Alice Owen?s Chas White grabbed the spoils in this closely contested final at Cheltenham Town Football Club this afternoon. The win was sealed with a lob over the advancing SFX keeper, Lee Wallace, midway through the first half.