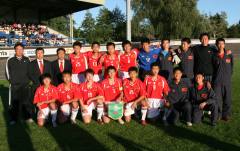 After a number of years planning between the Dr Sun Yi Xian's Youth Foundation, Sino-European and the ESFA the Sino-UK School Football Project was launched at Keele University last week. A team of Chinese under 18 schoolboys arrived at Keele University to join 65 English players (international hopefuls) and 10 young referees (on a skills improvement course) at the ESFA annual Coaching Week.

After a long and tiring journey from Beijing via London's Heathrow Airport and the M6, the Chinese party eventually arrived very late on Saturday 19th August. Very early on Sunday morning the young Chinese players and their coaches were up and working out to shake off the travel weariness from their bodies. Once the English players had arrived on Monday 21st August the Course started with a welcome from the ESFA Chairman, Mr Nigel Brown. Within the Chinese party were a number of VIP delegates from the Dr Sun Yi Xian's Youth Foundation, the China International Sports Exchange Centre, the Chinese FA and the Chinese Schools' FA.

The aim of the course was primarily 'improvement of skills', but it also allowed the ESFA international management team to have a first look at those players being recommended by their County Schools' FAs for international duty. Coaching sessions were held all week and the evenings were spent discussing such topics as 'diet and health' and motivation. Thankfully, a number of interpreters were available to translate the lectures for the Chinese team. Although all the players, Chinese and English, were mixed together in groups for the coaching it was decided that a training match should be held at Newcastle Town's ground between 17 players selected from the English trainees and the 17 man Chinese squad.

Despite the ground being under water at 9am on the morning of this training match, by the 7pm kick off time the surface was water free and absolutely perfect and the game was played in bright sunlight. The match provided some moments of skill and was competed at the highest level. The China team eventually coming out 1-0 winners after scoring from the penalty spot in the 38th minute. The events leading up the penalty caused the ESFA team to play the remaining 52 minutes with only 10 players.

All 34 players played in the game and were allowed, as a training match, to have repeated substitutions. This, however, did not spoil the enjoyment for a small but enthusiastic crowd. The Chinese Cultural Ambassador, Mr Ke Yasha, from the People's Republic of China Embassy in London attended the match and was introduced to all the players.

It is hoped that the English Schools' under 18 team will play two internationals in Beijing and Shanghai during the month of April 2007."

With UK Government backing from DCMS, DfES and The Football Association and the support of the Chinese Government and the Dr Sun Yi Xian's Youth Foundation, the Sino-UK School Football Project should allow for many school age players to experience the culture and way of life between two countries who both have a desire to educate their young people through a healthy activity such as football.