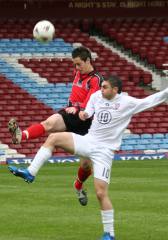 The deadline for accepting entries into English Schools' FA National Competitions for Season 2005-06 has been extended until Friday 15 July 2005.

Many schools have reported a 'non-receipt' of the entry form that was originally sent out five weeks' ago.  As a consequence, the ESFA Competitions Committee has agreed to extend the deadline to the above date.

Teachers are asked to give their pupils the opportunity and experience of meeting and playing against schools they would not normally encounter.

Only teachers in charge of school teams are permitted to enter a school / college team.

You can enter by downloading an entry form here